(The following is an excerpt from the book, The “Plan A” Diet.)

Several years ago, my husband shared with me an interesting technique that automotive manufacturers use to analyze the root cause of problems in their manufacturing processes. The Toyota Motor Corporation originally used this technique—called the 5 Whys—as a problem-solving activity to determine the underlying causes of any glitches in their systems or products.

The nature of a problem, as well as the solution, can become clear by asking the question why five times. The number five is just a guideline. It may take only three questions to reach a conclusion, or it might take six or more; but this questioning method prompts deeper thinking by repeatedly asking why until you get to the bottom of an issue.

A very simplistic example shown on Wikipedia[i] reads as follows:

The solution, therefore, is to assure the vehicle and its belts are maintained according to the service schedule.

I love the simplicity of The 5 Whys…

…and the moment my husband explained it to me, a light bulb came on in my head: What a great way to get people thinking about the cause-and-effect of food!

Although The 5 Whys can be used as a tool to evaluate all types of problems, I believe it can be especially effective when dealing with health issues. Not only can it help identify the root cause of a medical problem, it can save the hassle, time, and money that might have otherwise been spent pursuing a perceived but ineffective solution.

It’s wise to write your questions and answers on a sheet of paper and continue asking why until you get to the bottom of things. Ask friends or family to join you in this exercise; group think can lead to other ideas and thought patterns. Here’s one simplified example of how it might look: 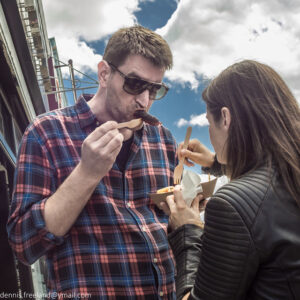 …the solution becomes clear: choose to change the foods being consumed. Doing so allows the body to stop the on-going damage being done three times a day and begins the healing process needed to reverse the underlying issue.

Unfortunately, most healthcare providers aren’t telling you that.

The medical system is instead geared primarily to treat your symptoms and control your blood biomarkers—which usually occurs at the first why. As a result, the underlying problem remains unresolved and continues to worsen slowly because the prescribed treatment doesn’t deal with the real issue—the food.

Using the 5 Whys technique can be an eye-opening exercise to help you discover the root cause of a health issue. So be like a curious toddler and keep asking why until you get a satisfactory answer.

One caveat with The 5 Whys technique:

The 5 Whys technique is limited to a person’s knowledge base. If the knowledge base doesn’t exist to examine the issue logically or ask the right questions, the root cause may not be fully understood. For this reason, I always encourage clients, friends, and readers to stay engaged in continual learning when it comes to diet and health.

Heed the principle of Proverbs 18:15—be an intelligent person who is always ready to learn.

The Resource section of this book lists websites which offer free webinars and instructional videos from credible doctors, daily blogs from renowned researchers, educational DVDs, books, and much more.

The more you understand how food affects every system in your body, the better equipped you’ll be to overcome your weight and health issues by recognizing their root cause. So please continue to learn and stay in the loop!

One way to keep learning is with this free class, “3 Food Mistakes Which Lead to Painful Joints, Extra Pounds, and Health Problems the Doctors Aren’t Solving.”  Check it out!