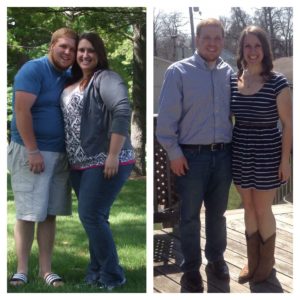 All my life I have been overweight. I remember in late elementary school starting to feel a little different than other kids because I was a little heavier on the scale during gym. Although I was active and played sports, I always felt like my weight was a barrier, physically and mentally.

During college, I had bunion surgery on my feet that kept me immobile for quite some time. This sedentary experience added not only the freshman 15 to an already overweight body, it was more like 50 pounds. I was the heaviest I have ever been at this point.

I also started noticing some digestive issues. I believe that I was struggling with IBS symptoms that almost made life unbearable. I was embarrassed to go anywhere. It seemed like whenever I ate something, my stomach would be set off and I would get sick at any time. Although I had tried many fad diets to lose weight in the past, I knew that something needed to be done to change how I was feeling. There had to be a better way to live than in constant fear of an upset stomach!

Some friends of the family had mentioned a documentary called “Forks Over Knives”. I had never gotten around to watching it but finally sat down with my husband to do so. After learning about the benefits of living a plant-based lifestyle, I was convinced that this is the change I needed in my life! However, I did not know how to start or what to eat. I thought that I’d be eating plain spaghetti with marinara sauce and celery sticks for the rest of my life!

After taking some nutritional courses with Cyd, and taste-testing several recipes, I realized that cooking was going to be a big learning curve. I was the biggest meat-eater around that did not like many vegetables, so I thought that this change was going to be impossible. I then searched the internet for whole food plant-based recipes with no oil. I spent hours and days looking for recipes and trying out many new dishes week after week.

Slowly with time, I started to develop a pile of new recipes that I liked that became a regular dish on my weekly meal plan. The more I ate plants and avoided all animal products, processed foods, and oil, the better I felt. I realized that my taste buds began to change, and I started enjoying foods I never liked before.

I had committed to changing my lifestyle. In the process, I lost almost half my body weight! (My husband lost about 50 pounds too!) I also realized that all my digestive issues were gone as soon as I cut the bad foods out of my diet. I have never had issues since eating fruits, vegetables, whole grains, and legumes.

Throughout this journey, I discovered that I am a great cook! I never had a passion for cooking until I had to relearn how to do so with foods that were compliant with my new lifestyle. I developed a love of creating tasty dishes that are replicas of the foods I ate before, but healthier and plant-based! My hope is that by mastering some of the recipes I have created, I can help others love food and the process of gaining physical, emotional, and mental health.

After losing 115 pounds in about a year just from eating, I am now running 5Ks and continue to thrive in eating whole plant foods. Some may think that once the weight is off it’s okay to go back. However, I often remind myself why I began this journey in the first place. It was not to lose weight, although that was an added bonus. It was about changing the way I lived so that I could thrive in life. If eating healthy allows me to avoid the issues I faced earlier and improves my everyday quality of life, I would continue to make this choice again and again.

I never thought that I would be able to give up fried foods or meat, but I am a walking example of how one can change if you are ready and committed to taking the steps. It was extremely hard at first, but once I got going and felt the benefits firsthand, I never looked back. I have decided to keep on running forward!

(Cyd’s note: Amanda’s story inspires me beyond words, and I’m certain it will inspire others too. Although initially skeptical, she remained committed to her new lifestyle and stuck with it through the initial learning curve. She took the necessary time to find new recipes, and her health improvement motivated her to stay the course. Amanda and her hubby are regulars at our potlucks, and I can attest that she is an AMAZING cook. Her recipes are absolutely delicious! Thanks, Amanda – If you ever open a restaurant, I’ll no doubt be a regular!)