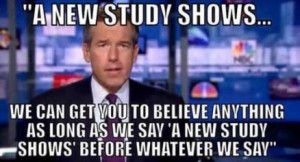 I saw this interesting blurb on social media recently which reads:  “A new study shows we can get you to believe anything as long as we say “A New Study Shows” before whatever we say.  That would be comical if it weren’t so terribly true. I’ve overheard or taken part in many conversations in which friends are reporting of the latest nutrition ‘fact’ they’ve heard or read about. Often times the latest report contradicts what was just reported a few months ago.

It’s no wonder that people are nutritionally confused. Because we live in an information age, the continual confusion can cause people to throw in the towel and decide to just eat whatever they want. It’s important to be discerning in this area, especially if you are basing your health decisions on things that you hear or read.

In the meantime, here are a few tips to help you filter any diet and health information you may read or hear:

There’s much more I could share here. Please base your food choices and health decisions on independent and credible evidence-based research. Contact me at cydnotter@comcast.net if you need help.