…is a common expression used to justify the consumption of certain amounts of junk food. But is it really a good idea?

Moderate amounts of ‘bad’ foods have no place in a health-promoting plan for several reasons. To begin with, the vague definition of moderation is very subjective and no two people in the room will have the same interpretation.

What Does it Mean to You?

Moderation is defined as ‘the avoidance of excess or extreme,’ but what does that mean to you? Does moderation apply to the quality of the food, the quantity of food, or both?

It’s not uncommon for others to tell me of their moderation rationalizations, especially if we’re dining out together and they’ve chosen poorly from the menu. I’ve observed that most of those rationalizations have to do with the type of food they’re consuming, not the amount. 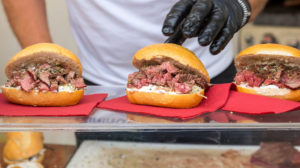 But what if someone allows for bacon and eggs on Sunday morning, one pastry at the Tuesday work meeting, a pepperoni pizza on Friday night, a crispy chicken sandwich when the office orders out, one ice cream treat after the kid’s baseball game, feta cheese on their salads, a little creamer in their daily coffee, a caramel latte when running errands, and an occasional candy bar at the gas station?

Within a short time frame they’ve consumed a lot of terrible foods which promote poor health and serve to keep any food addictions alive and kicking. Allowing yourself to have animal-based foods, fast food, fried foods, and sugary treats on a ‘moderately’ regular basis is going to derail your weight loss efforts and your health. There are better ways to replace those foods and satisfy your sweet tooth.

In his book Prevent and Reverse Heart Disease, Dr. Caldwell Esselstyn includes a chapter titled “Moderation Kills” in which he references a meta-analysis review demonstrating that heart patients who moderately reduce their fat intake are able to slow the progression of heart disease, but that the disease continues to progress and eventually takes its toll.[i]

Another study published in 2015 of over 6800 adults, which assessed diets of moderation against obesity and Type 2 diabetes, concluded that those consuming the most diverse foods actually had the worst diets due to eating less fruit and vegetables and more processed meats, desserts, and soft drinks.

The researchers concluded: Our findings provide little evidence for benefits of diet diversity for either abdominal obesity or diabetes. Greater dissimilarity among foods was actually associated with gain in waist circumference. These results do not support the notion that “eating everything in moderation” leads to greater diet quality or better metabolic health.[ii]

The attractive trap of moderation is one of those slippery slopes to be avoided. Once you give yourself permission to eat in moderation, the clear cut line of what foods are off limits becomes blurred and you’ve weakened your commitment to the pursuit of health. Instead, strive to choose health promoting foods whenever you get hungry.