It’s certainly not my intention to rain on your parade, and I’m sure many of you don’t want to hear this. But current evidence shows that even low intakes of alcohol increases the risk of many health issues.

Many doctors and other health professionals continue to recommend alcohol consumption based on research that we now know was faulty or fraudulent.

Take the studies about resveratrol in wine, for example. Back in 2008, scandal surrounded Dr. Dipak Das, a doctor at the University of Connecticut who was responsible for much of the information regarding the health benefits of resveratrol. He was sued for fraud, and found guilty on 145 counts of fabrication and falsification of data.

Current studies show that the resveratrol in wine does not reduce the risk of heart disease, protect against cancer, or extend a person’s life. Dr. Pam Popper explains it in more detail in this video.

Alcohol is not harmless, and despite studies sponsored by the alcohol industry, no health benefits are associated with drinking a glass of wine (or other alcohol) per day.

The alcohol industry has been quite successful in its decades-long campaign to distort the facts by claiming the protective effects of alcohol, even though there are none. The basis for many of the industry’s claims are studies in which certain groups of people were misclassified as “non-drinkers.”

Dr. Michael Greger explains it like this: “If you look at studies of smokers, sometimes you see higher mortality rates among those who quit smoking, compared to those that continue smoking. Why? Because the reason they quit smoking is because they got sick.

So, of course, sick people die more often than less sick people. That’s why when you classify someone as a non-smoker in a study, you have to make sure they’re a ‘lifelong’ non-smoker and not just a non-smoker…since last Tuesday.”[i]

Alcohol studies also misclassify former drinkers as if they were lifelong abstainers—drinkers who may have quit because they got sick. When the studies with the misclassified drinkers were corrected, the results showed no apparent benefit of light or moderate drinking.

What about the studies that show alcohol raises “good” cholesterol (HDL)? It turns out that HDL is no longer considered protective, but rather it’s the lifelong reduction of “bad” cholesterol (LDL) which does indeed decrease the risk of heart disease.[ii] 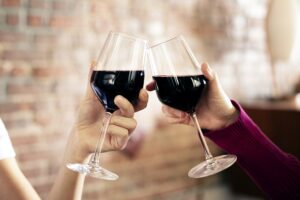 When you drink alcohol (and before it gets detoxified in your liver), your body breaks down the ethanol into a toxic chemical called acetaldehyde. Acetaldehyde can irreparably damage DNA, which allows cells to grow out of control.

According to the CDC and cancer researchers, acetaldehyde does cause cancer; in fact, all types of alcoholic drinks – even red and white wine, craft beers, and cocktails – are linked with cancer. And the more you drink, as well as the length of time you’ve been drinking, the higher your risks.

At least six cancers are linked to alcohol use: mouth and throat, voice box, esophagus, liver, colon and rectum, and breast cancer. Drinking is also linked to pancreatic cancer and melanoma; plus there’s also a strong link to prostate cancer, according to Harvard researchers.

The IARC (International Agency for Research on Cancer) has concluded that all alcoholic beverages are to be considered “carcinogenic to humans.”

The U.S. Dept. of Health and Human Services lists alcohol as a known human carcinogen…

…as does the World Health Organization, who have now categorized alcohol as a definitive human breast carcinogen.

Current estimates suggest that alcohol causes nearly 6 percent of all cancer deaths worldwide.[iii]
According to the National Cancer Institute, roughly 1.9 million Americans will be diagnosed with cancer in 2021, and over 608,000 will die; which means 36,480 Americans will die this year specifically from alcohol-related cancers. 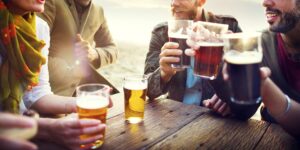 Does Just One Drink a Day Matter?

Yes, unfortunately it does. It’s not just excessive drinkers who are at risk.

Even light drinkers (one drink a day or less) have a higher cancer risk than those who abstain. A meta-analysis of over 200 separate studies estimated that nearly 5,000 breast cancer deaths – and 24,000 esophageal cancer deaths per year worldwide –  are attributable to light drinking.

The above study lead to an editorial in the medical journal Breast that concluded “women who consume alcohol chronically have an increased risk for breast cancer that is dose dependent but without threshold.”

Without threshold means there’s apparently no level of alcohol consumption that doesn’t raise breast cancer risk to some degree.

The AICR (American Institute for Cancer Research) states on their website that there is no “safe” amount of alcohol that does not increase the risk of some cancers. An increased risk of breast and esophageal cancers starts at less than one drink per day.

And the National Cancer Institute has this to say on their website: In fact, a recent study that included data from more than 1000 alcohol studies and data sources, as well as death and disability records from 195 countries and territories from 1990 to 2016, concluded that the optimal number of drinks to consume per day to minimize the overall risk to health is zero. (underline emphasis mine).

…that’s because alcohol is a known toxin to every organ in your body, especially your liver, brain, heart, and kidneys.

What About Weight Gain?

Yep. Not only are alcoholic drinks empty calories, they inhibit your body’s ability to BURN fat by as much as 30%.

Is “beer belly” a real thing? According to Dr. Michael Greger, six studies comparing regular beer with non-alcoholic beer found more weight gain on the alcoholic beer. The body has no capacity to STORE alcohol, so it may temporarily switch from burning fat to burning alcohol to help clear it out of the system, leaving a fat balance. Not to mention again,  the empty calories, similar to soda pop and fruit juice.

Plus, we EAT more when we drink. Alcohol is an appetite stimulant, and studies show that those who drink a glass or wine or beer before lunch may end up eating more food than if they had drunk the same volume and calories of a non-alcoholic beverage.

Alcohol and obesity is even more concerning, because up to 9 out of 10 obese individuals already have non-alcoholic fatty liver disease. This is referred to as “the double peril” in some medical journal editorials.

Based on the latest research, it would be irresponsible for me to condone even light or moderate drinking on a regular basis. There’s probably no harm in having an occasional drink at special occasions, such as weddings or holiday celebrations — that is your decision. But routine alcohol consumption cannot be considered an acceptable part of a healthy diet or lifestyle.

As I said at the beginning, please don’t shoot the messenger.

Wine and beer make people loud and uncontrolled.
It is not wise to get drunk on them. (Proverbs 20:1)

[i] Dr. Michael Greger, “Is It Better to Drink a Little Alcohol than None at All?” dated April 4, 2018; accessed September 6, 2018. https://nutritionfacts.org/video/is-it-better-to-drink-little-alcohol-than-none-at-all/

[ii] Greger, “Is It Better to Drink a Little Alcohol than None at All?”

[iv] Dr. Pamela Popper, “A New Business Relationship: The NIH and the Alcohol Industry.” Posted to the Health Briefs section at www.wellnessforumheath.com on March 22, 2018. Accessed September 6, 2018.

Other References are available upon request.