The most popular fake sweeteners on the market today are Equal and NutraSweet (aspartame); Splenda (sucralose); Sweet One, ACK, and Sunett (acesulfame); and Sweet ’N Low (saccharin). Plus there’s xylitol (or any sugar alcohol that ends in -itol), and stevia (an herb).

…because they’re intensely sweet and add no calories to your diet.

Such sweeteners are widely used in processed foods such as soft drinks, candy, canned foods, jellies, dairy products, puddings, and pretty much anything labeled “sugar-free.”

According to dietitians at the Cleveland Clinic, artificial sweeteners lead you to crave more sweets and are associated with changes in gut bacteria that lead to increased fat storage.

The worst sweetener is aspartame, which research shows has caused cancer in three independent animal studies[i] and is linked to hypertension and other health risks. While there’s much controversy over aspartame—too lengthy to mention here—it is best avoided! 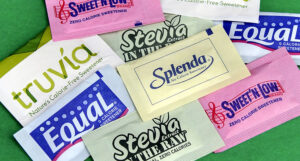 Researchers have also found that artificial sweeteners—which are often recommended for diabetics and obese people—cause changes in the gut microbiome that are clearly related to impaired glucose tolerance.

Artificial sweeteners made in a laboratory contain no nutrition and should be avoided.

Stevia is the only packaged sweetener I’m comfortable recommending for beverages. To date, there are no known health issues when stevia is used sparingly.[iii]

Fruit should be the first food of choice when craving something sweet, or desserts made with frozen fruits such as easy homemade Very Berry ice cream.

Dates are also a wonderful whole food sweetener that can be used in desserts, smoothies, sauces, and certain salads.

Date paste or date syrup are other acceptable options since they’re made using only whole dates. Here’s my favorite recipe for date paste – and it’s super easy, too. Just dates, water, and a blender or food processor.

If you’re not struggling with sugar addiction, however, The “Plan A” Diet does allow for the occasional use of simple sugar such as adding a small amount of raw cane sugar to your oatmeal or making a recipe that calls for maple syrup.

(Portions of the above information is taken from the “Deceptive Foods” chapter in The “Plan A” Diet: Combining Whole Food, Plant Based Nutrition with the Timeless Wisdom of Scripture. Order a signed copy or learn more by clicking here.)