(the following is an excerpt from book, The “Plan A” Diet)

Dairy: Let’s begin by considering the very purpose and function of cow’s milk, which is to grow an 80-pound calf into a 600 to 800-lb cow in about eight months. In order to fuel that much growth, cow’s milk contains growth hormones which are not designed for human consumption. One such hormone, called IGF-1 (Insulin-like Growth Factor), is a hormone which sends a signal to our cells to trigger growth. The more of this hormone in our bloodstream, the higher the risk of ‘growing’ several types of cancer, especially breast and prostate cancer. IGF-1 hormone not only promotes cancer development, it helps cancer metastasize to the bones, liver, lung, brain and lymph nodes.[i]

Casein is another major concern with dairy. Casein is a dairy protein which has been proven to initiate cancerous tumors. The research of Dr. T. Colin Campbell in The China Study demonstrated that cancer cells in rats could be turned on or off by varying the amount of casein from 5% to 20% of calories; these initial findings were relevant because humans and rats have similar protein requirements. Dr. Campbell’s research then led to a groundbreaking study—funded by the National Institutes of Health, the American Institute for Cancer Research, and the American Cancer Society—which followed thousands of people in China for 27 years and revealed the undeniable evidence between animal proteins and cancer rates. After decades of credible, independent research, Dr. Campbell states that “casein (the main protein of cow’s milk) is the most relevant chemical carcinogen ever identified.”[ii] 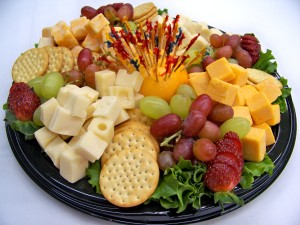 One of America’s favorite dairy indulgences is cheese—a.k.a., dairy crack. I’m not surprised when people tell me they struggle to give up their cheese. Cheese contains casomorphins, a mild form of morphine which rewards the same pleasure receptors in the brain as narcotics do. As explained in the “Hooked on Sweets, Treats, and Other Cheats “chapter, casomorphins attach to the brain’s opiate receptors and stimulate the production of dopamine—providing feelings of comfort and reward and making cheese one of the most highly addictive foods in America.

Cheese is a highly processed food. Milk is warmed up to simulate the animal’s body temperature and bacteria is added to activate fermentation; the milk is then coagulated with rennet (an enzyme often obtained from a cow’s stomach lining). Once the milk sets and is separated into solids and liquids, salt is added to enhance flavor and stop the bacteria growth. Then the cheese is aged. Are you interested in knowing why your cheese is smelly? According to Dr. Neal Barnard, depending on the type of cheese being made, the same bacterial species that live on your feet (brevibacteria) or the same bacteria responsible for human body odor (staphylococcus epidermidis) are added during the fermentation process.[iii] Cheese also contains concentrated levels of dairy proteins which, in addition to cancer, have been linked to a variety of health issues such as digestion problems, migraines, asthma, acne, allergies, and more.

Dairy is also loaded with cholesterol and saturated fat, with cheese being the highest source of saturated fat in the American diet. Saturated fat—which is solid at room temperature and is found in dairy products, meat, and eggs—raises cholesterol levels in the blood and increases the risk for heart disease, stroke, Type 2 diabetes, Alzheimer’s disease, and other ailments.

Another problem with dairy (and meats) is the inherent content of phosphoric and sulfuric acids. Our bodies strive to remain pH neutral, which means a balance between the acidity and alkalinity levels in the blood. When we consume acidic foods such as meats and dairy, the body must go into defense mode by buffering that acid in whatever way possible—and it does so by drawing calcium directly from our bones to act as the buffer. Calcium released from our bones for the purpose of buffering acidity is typically excreted through the urinary tract. Some doctors refer to this as “peeing away your bones.” Even with the vast amount of undeniable evidence, convincing people that dairy is detrimental for bone health is a tough sell, since the marketing pundits in the dairy industry have convinced us for years that we need the calcium in dairy for strong bones. Yet the research is abundant and clear that the countries that consume the MOST dairy products and calcium supplements have the highest rates of bone fracture.[iv] It’s called the calcium paradox. I offer an entire 2-hour class on this very topic. If you want stronger bones, stop eating dairy. I speak from experience on this topic. Early in my plant-based journey—before I was aware of the inaccuracies with bone scans and the fact that mineral density has little to do with bone strength—I was diagnosed with osteopenia. I opted to finally give up the all dairy products, and the subsequent scan was normal. (Please note that I am not recommending bone scans; that’s a whole other topic!) The bottom line is that we’re designed to get our calcium from plant food—which, by the way, is where the cows get it. 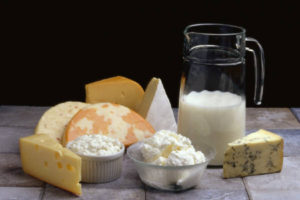 Let’s briefly talk about estrogen. Many women who are worried about estrogen often express concern over the soybean. Soybeans contain phytoestrogen—plant estrogen—which does not increase blood estrogen levels (see more on soy in the FAQ chapter). Yet, these same women regularly consume yogurt, milk, cheese, cream, butter, and ice cream while being unconcerned that cow’s milk is the largest source of mammalian estrogen and estrogen metabolites in today’s diets. Dairy foods account for 60% to 70% of the estrogen that comes from food—and those elevated levels are due to the factory farm practice of continuing to milk cows throughout pregnancy.[v] A whole host of women’s issues are related to elevated estrogen, including PMS, irregular periods, fibroids, dysplasia, infertility, cancer, hot flashes, and other issues.[vi]

As you can see, there are many concerns with dairy, and we haven’t even touched upon the Bovine Growth Hormone injected into the cows (BGH has been banned in nearly every country but ours), the steroids, antibiotics, toxins, and the pus cells. Yes, you read that correctly, pus cells. When it comes to dairy products—including yogurt—we have saturated fat, cholesterol, proteins linked to cancer risk, bone-draining acids, estrogen, bovine growth hormones, steroids, antibiotics, toxins, pus cells, and more. Is low-fat dairy a better option? Not really. Removing the fat from milk increases the protein concentration; increased animal protein = increased acidity = increased calcium drain from the bones. Increased animal protein also means an increase in cancer risk. No form of cow’s milk is healthful unless you happen to be a calf. Doing away with dairy is one the best health decisions you could ever make. But fear not—there are delicious plant-based alternatives for everything—including homemade cheeses and ice creams that are simple and delicious.