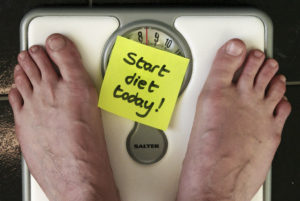 While many people are comfortable making only gradual dietary changes toward plant based eating, there are others who choose to make a total dietary conversion once they’re convinced of the health benefits.  Still others may fall somewhere in between – making a series of small dietary changes with a firm goal toward total conversion.

For those who wade into the waters more slowly, every small change toward a whole-food, plant-based diet without added fats/oils is definitely a step in the right direction.  While I never want to discourage even small, positive changes, it should be noted that the overall dietary pattern is what matters greatly; just removing or adding a few different foods to the Standard American Diet is not likely to result in any noticeable health improvement.  For example, adding flax seed to a dairy based smoothie, including some broccoli in a steak stir fry, or topping a high-fat cheesecake with a few blueberries is not likely to produce much change in one’s health.  Often when those small changes don’t result in any lasting health improvement, some people assume the “diet” isn’t working and end up throwing in the towel.  The mantra goes something like this:  “I’m making ALL these changes, but it isn’t working.  I haven’t lost a pound and my cholesterol hasn’t budged.  Might as well eat whatever I want.”  Enter Big Disconnect  # 4:  Making small dietary changes and expecting big weight loss or big health improvement.

Committing to making small changes is commendable, and if that’s your personality, then by all means go for it!  The more changes that are made on the spectrum of healthy eating, the more health improvements will be seen.  But please know that making small changes should not be the end goal; it should be the catalyst for continued change until the overall dietary pattern is one that promotes optimal health.  It’s imperative to continue moving forward with those changes on a regular basis – using a specified time frame – with the goal to get that dairy, that meat, and those high-fat desserts out of the diet all together.  Keep moving forward until God’s “Plan A” Diet™ – the way you are designed to eat – is your pattern of eating every day.  The resulting health improvement will be a true motivator to stay the course!

If you're interested in healthy sweet treats, you'll love these recipes for "10 Simple Dessert Smoothies!" Click here to get your free copy.