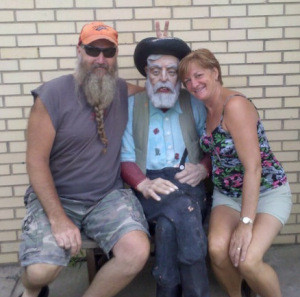 May I share a local SUCCESS story? In the spring of 2013, a couple from Braidwood named Tim and Teri began to search out dietary options as a result of Tim’s failing health. One year later, because of their conversion to a whole food, plant-based diet, the results are speaking for themselves. Below is Tim’s story. Please read it and be inspired….because results such as this ARE typical!    ~ Cyd

Post Written by Tim: In the beginning I was a dyed in the wool meat eater who thought that vegans were a bunch of liberal wackos. It’s not about being a vegan…. It’s about being healthy. I had some health issues but did not relate them to my diet. I decided I was getting too fat and wanted to lose some weight. My son had been on Atkins before and lost weight so after trying Weight Watchers with my wife and having no success, I thought I would try Atkins. I lost some weight on Atkins and thought I was doing okay. Their plan tied into my meat eating habits rather nicely. I always had the nagging feeling in the back of my mind that eating all that animal fat and bacon was going to clog my arteries because I already had a stent in one of my arteries and was diagnosed with heart disease.

Then one day I noticed myself turning a yellowish color in my skin. I also had a hard time with my recovery after working out, and my muscle ache was constant. It just seemed like it would not go away. I still did not relate this to my diet. I, like so many others, decided to consult Dr. Internet with my symptoms to try and see what was wrong. With just googling my symptoms, I started getting all kinds of information popping up on low carbohydrate high protein diets and how they can cause all the symptoms that I was experiencing. Basically it said I was stressing my liver to the point of failing. Liver failure due to unused proteins. Thus the yellow skin tone, muscle ache and fatigue.

My wife had been training with a personal trainer for some time and had mentioned that he was a plant-based eater and preached it religiously. At the time I figured he was just a nut. It wasn’t that I was stubborn it was just that I was uneducated. She was also in contact with a plant-based nutritionist through the newspaper named Cyd Notter. She suggested we make an appointment and just go to hear what she had to say. I am not afraid of learning new things so I was okay with it. After talking with her, a lot of what she said made sense. She sent us home letting us borrow the video “forks over knives”.

Watching that video pissed me off. It opened my eyes to the hog washing that I had been subjected to all through my life just for someone else’s profit. I immediately bought copies of that movie and the adjoining literature and cookbooks and sent a package to each of my kids. I felt it was my duty as their father to let them know what I have learned. Unfortunately they, like so many others, refuse to respond because they are too comfortable in their standard American diet. 🙁

Ever since that time my wife and I have been 100% whole foods plant-based in our eating. We can’t be happier. Prior to my diet change I suffered from high blood pressure, reactive hypoglycemia, acid reflux, plantar fasciitis, heart disease, arthritis, incessant back issues, digestive problems, high cholesterol, being overweight, and a general feeling of poor health. As per my doctor’s orders I took eight medications to try to fix it. Nothing worked. Now I am cured of all of the above. I take no medications. I am the same weight and waist size as I was as a senior in high school. My energy levels have increased. My pain is way, way lessened. My back issues have almost entirely ceased. My arthritis has stopped. And my general sense of well-being and feeling of health are off the charts. Did I say BAM?…………BAM!

Funny what an open mind and a little bit of research can do for a guy. I am living proof of what a plant-based diet can do for your health. I don’t understand why people seem to want to fight against good health. Such negative strong     reactions to a positive and harmless message. Maybe it’s caused from their addictions to meat and animal products and processed foods. Or guilt in having to face up to the fact that they are making informed decisions to pursue their poor choices and not being able to hide behind ignorance. If we would only shut up they wouldn’t have to feel uncomfortable.   The one best single thing I’ve ever done for my health is to change my diet to whole foods plant-based. I guess that’s why I try to spread the info as much as I do. Hopefully it catches on with someone else.

Thanks Tim! Its commitment and results such as yours and Teri’s that inspire and energize many of us! Not only did you seek out the right information, you were both open to it and jumped in with both feet. So proud of what you’ve accomplished! I pray your story will inspire others to follow suit – so that they can regain their health and experience their own BAM!          ~ Cyd

WHAT SHALL WE EAT?!

I have been experimenting with plant-based recipes for over 23 years. And since my husband and I have slightly different palates and texture preferences, a recipe has to please BOTH of us in order to be considered a “keeper”. I will only print the keepers; however, I encourage you to do your own experimenting as you get more familiar with a variety of foods which may be new to you.

People tend to eat the same 6 – 8 dinner recipes over and over, so it won’t take long to find the ones you like – then you’re really on your way! To stay motivated and enjoy food to the fullest, experiment with at least one new recipe each week! Lasagnas, burritos, pastas, soups and stews, casseroles, appetizers, desserts, ‘meat’ loaves, enchiladas……….it’s amazing what you can do with plants!

There are thousands and thousands of whole food, plant based, oil-free recipes on line. I’ll be posting a few of our favorites, but you can also View our Recommended Resources for some links to find great recipes!