It can be challenging to find oil-free tortilla chips on the market. Sometimes even the “baked” varieties contain unwanted ingredients. But here’s a solution which is easy, cheaper, and it my opinion, much tastier!

Purchase corn tortillas, the type that come in a paper wrapper. The ingredients are typically corn, water, and lime. Cut into quarters, brush or spritz with a little lime juice, and add a salt (or low salt/salt-free) seasoning or other spice. Bake on a parchment or silpat lined baking sheet at 350 for 13-15 minutes until crispy (they may require more time, it depends on your oven. Keep an eye on them and be sure they’re crispy, but not burnt. They’ll harden up a bit as they sit, too.) Note: You can also make tostada shells using this method, simply bake the tortilla whole rather than cutting it.

For the batch shown in the photos, I used NutraSalt Low-Sodium Seasoned Sea Salt. It packs a bit of a punch due to the added spices and paprika. Serve with your favorite salsa (mine happens to be any mango or peach based salsa, which offsets the spices nicely). Bon Appetit! 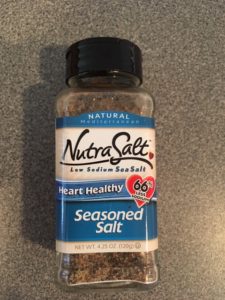 Sign up for my monthly newsletter and receive a free copy of “10 Simple Dessert Smoothies!”

If you follow a whole food, plant-based, no-added-oil diet, you know that eating out can be a real challenge!

In this brief video, Dr. McDougall says that “eating out like a war zone!” But he’s right when he suggests that ethnic restaurants are your best bet – Mexican, Italian, Chinese, Thai, and Indian, just to name a few.

Of course, nothin’ beats home cooking for health and variety, but there are ways to eat out without compromising your health.

We’d love to hear some of your tips, too!