Recently I had the blessing and privilege of being interviewed by Rekishia McMillan on her Rock Your World Naturally podcast.

Her passion is teaching women how to improve their health in body, soul and spirit by using biblical wisdom and practical lifestyle strategies. Check out her website at rockyourworldnaturally.com.

Take a listen to our interview here. I’m very grateful to Rekishia for having me on her show….be sure to check it out! The interview begins at the 11:30 mark, with Rekishia sharing some great comments about the Daniel Diet and the benefits of plant-based nutrition before the interview.

Don’t become so well-adjusted to your culture that you fit into it without even thinking. (Romans 12:2, MSG)

For years, I was somewhat suspicious about the health claims touted by the alcohol industry; but I also believed it was no big deal if alcohol was consumed moderately. There was no science behind my beliefs at all. Perhaps I too was swayed by the Alcohol Industry’s marketing messages or maybe the fact that I was raised by parents who owned a bar.

However, I began to do more research on the topic while writing The “Plan A” Diet. I looked into many credible websites and studies. And what I discovered was that the Alcohol Industry (AI) has done a great job in keeping the public relatively ignorant, uncertain, and in denial about the “alcohol causes cancer” message.

Dr. Michael Greger has several videos on the topic of alcohol, but take a look at this one titled Can Alcohol Cause Cancer, Here are a few of the statistics/tidbits he shares:

The bottom line was summarized in one research paper as this: The consumption of alcohol, an addictive carcinogen, cannot be a healthy lifestyle choice.

Here’s another article of interest stating that for women, having just one alcoholic drink per day increased the risk for alcohol-related cancers (mainly breast cancer) by 13 percent, compared with those who consumed no alcohol.

Based on the latest research, it would be irresponsible for me to condone even light or moderate drinking on a regular basis. There’s probably no harm in having an occasional drink at a wedding or a holiday celebration—that is your decision. But routine alcohol consumption, even at low levels, cannot be considered an acceptable part of a healthy diet.

Here’s a link to the article about alcohol as it appears in my book, where you can read more about the ties between AI and our government, and also how AI distorts the research to make alcohol appear healthy.

Please don’t shoot the messenger on this one, but please do consider the risk factors when making your choices.

Thanks to my sister-in-law for recommending this recipe! Black Bean Lentil Taco Soup by The Garden Grazer is a definite “keeper” that is super easy to prepare! Top with avocado, green onions, or tortilla strips for a little something extra.

Becuase this soup is hearty and thick, it also makes a great potato topper! Boil and mash a few Yukon gold potatoes and top with this soup for a satisfying, delicious, starch-based meal which not only fills you up, it also provides ample protein, calcium, fiber, and all those lovely nutrients which our bodies need for good health. 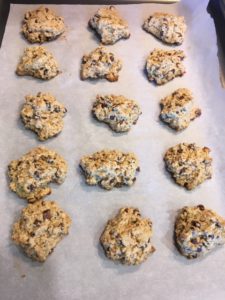 Want to zest up your cookies with a delicious hint of orange? These cookies will do the trick!

I’m a big fan of the orange/chocolate combination, so this recipe for Orange Chocolate Chip Cookies from Brandi Doming at thevegan8.com caught my attention.

I used a mandarin orange because it’s what I had on hand, and the cookies were still quite delicious! (Per Brandi’s note, do NOT used bottled orange juice, as tempting as that might be. Use freshly squeezed orange juice, plus the fresh zest, for the best flavor.)

Instead of coconut sugar, I used “sucanat” – an organic cane sugar which I also had on hand.

This one is definitely going into the “keeper” file!