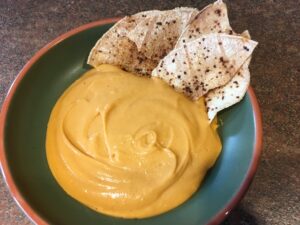 Are you ready for a quick and yummy, nut-free cheese sauce? Give this 5-Minute Game Changer Cheese Sauce recipe by the entertaining Jill McKeever a try. The recipe is listed below her video, and it’s definitely a keeper!

So far, we’ve used this cheese sauce a number of ways. We spread it on Barley Burgers, used it as a dip with home-made tortilla chips, made cheesy baked potatoes with broccoli, and used it on Tostadas! It would be great for mac-n-cheese, too (but you may have to thin it out a bit).

I’d love to know your thoughts if you give this one a try!

Information about the book (FREE SHIPPING through 4/30/2020)

Last week’s pop quiz (which food has the most fiber) was sort of a trick question. But at least you’re really on your toes, now, right?

This week’s quiz isn’t a trick, however. The question does have one right answer. It’s an important topic since saturated fat stiffens the artery walls, makes our blood viscous (thick), leads to high blood pressure and heart disease, impairs brain function, and contributes to type 2 diabetes and many other diseases.

Question: What food is the highest source of saturated fat in the American Diet?

So many choices on this one…..

Could it be the donuts? Maybe not?

Answer: Cheese. Cheese is an extremely fatty product and is the number one source of saturated fat in the American diet. About 70% of its calories come from fat, most of which is saturated fat, or “bad” fat. Americans eat more than 34 pounds of cheese per person per year – three times more than they did in 1970.

That’s not to say the steak, fish, chicken, and glazed donuts don’t contain a great deal of saturated fat. They do. But cheese is the highest source.

Fortunately, there are MANY delicious plant-based recipes for cheese, cheese sauce, nacho cheese, parmesan cheese, holiday cheese balls, and much more. Check out www.eatplant-based.com or www.thevegan8.com for some yummy recipes.

Next week’s Pop Quiz will be the final one of the series! Unless you want to keep going 🙂

While there is no cure for the flu or common cold, there is a natural product which has proven to not only reduce the symptoms, but drastically shorten the duration of the ailment.

What is it? Black Elderberry syrup (extract).

In this video, Dr. Pam Popper talks about the research proving this treatment to be very effective – and with no side effects! (Fast forward to the 4:18 point to hear her speak on the topic). She mentions a product called Sambucol (black elderberry syrup) which can be purchased online if you can’t find a similar product locally.

I’m betting this would be most effective if taken at the onset of an illness, so it might be wise to have black elderberry on hand. I notice it’s available in tablet form, as well.

PS: If you’re struggling to lose weight or worried about your health, a new online course is releasing on Feb. 19, 2020, which would definitely benefit you. If you’re ready to take control of your weight and health, this course has the answers. I would love to guide you on the 6-week journey to a leaner, healthier you. Click here for details. There’s a deadline and limited seating. Please contact me with any questions.

Dear friend, I pray that you may prosper in every way and be in good health physically

Whether its Thanksgiving, Christmas, or a New Year Celebration, these crowd-pleasing “Holiday Recipes” by Terri Edwards at EatPlant-Based.com will fill the bill!

Check out this mouth-watering video she recently posted.

We are so abundantly blessed with delicious, nutritious food!

And God is able to bless you abundantly, so that in all things at all times, having all that you need, you will abound in every good work. (2 Corinthians 9:8, NIV)