A friend forwarded the link to this video, and it’s so amazing that it’s worth sharing with you!

The long-term Mayor of Marshall (and his wife) pursued an alternate treatment for his impending prostate cancer, and what they discovered changed not only their lives, but many in their town as well.  By adopting a whole foods, plant-based diet, they’ve demonstrated the power of good nutrition and helped many in their community lose weight and reverse common ailments.  The stories are incredible and inspiring!

Well-known doctors and speakers appear in the video, and some of the topics discussed include cancer, Alzheimer’s disease, animal protein intake (especially in athletes), fat intake and diabetes, the nutrition stats on fish, and one humbling example of how consuming just a little bad food in our diets on a consistent basis can prevent optimal health.

This video is about an hour long, but well worth the watch.  If you’re like me, you’ll come away inspired to save your whole community.

I’d love to hear your “big take-aways” after you watch it………please do share!

Do you recall where you learned how to store your fruits and veggies?  No one ever taught me the proper way, and I wasn’t paying much attention to how my mom handled it……so as an adult I just made it up as I went along.  If I thought the fruit was hearty, I left it on the counter.  If the item seemed fragile, I’d store it in the crisper drawer of the fridge.

Turns out I was off-base on a few things!  I always put fresh ginger in the fridge (wrong) and let the peaches sit on the counter until they get too ripe/mushy (wrong).  I’ve never stored my basil in water, and rarely have I used the right type of ‘storage bags’…..although I did invest in the “As Seen on TV” Debbie’s Green Bags several years ago.   I don’t recall having good luck with them, but again, it may have been due to my unscientific system.

Have you ever purchased a hard avocado, hoping it would soften up before Thursday night’s fajita dinner?

Well, it turns out we can enhance that ripening process by storing the avocado inside of a paper bag along with an apple!  Who knew?

Here’s a link to “Fruit & Vegetable Storage 101”, an article produced in collaboration with the Centers for Disease Control (CDC).  You may find it helpful, as I did.   Scroll down to the bottom of the page to view or print the handy-dandy pdf chart for easy reference.

Want to know the best way to CLEAN your fruits and veggies?  Dr. Greger explains why a home-made salt solution (along with the mechanical action of rubbing) is a great option…..read more here. 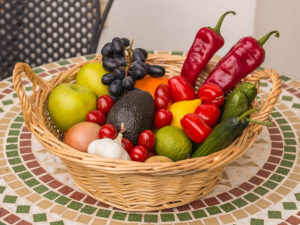 Finally, please remember to keep eating those fruits and veggies!  The recommendation is that adults consume 1.5 – 2 cups of fruit, and 2- 3 cups of vegetables daily; however, a study released by the CDC in 2015 revealed some very troubling data.  During 2007-2010, 76% of Americans did NOT meet the recommended fruit intake, and 87% did NOT meet the recommended vegetable intake. Half the total US population consumed less than 1 cup of fruit and less than 1.5 cups of vegetables daily.(1)  Those results are dismal to say the least, especially for such meager recommendations. 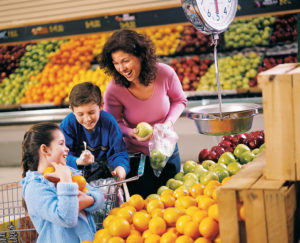 Sadly, the kids aren’t doing much better.  The CDC reported that improving fruit and veggie intake during childhood is definitely needed; 60% of children consumed less than the recommended fruit, and 93% consumed fewer vegetables than recommended during that same time frame.

The CDC says that eating more fruits and vegetables adds nutrients to the diet, reduces the risk of heart disease, stroke, and some cancers, and helps manage body weight when consumed in place of more energy-dense foods.

We also know that a host of other ailments are relieved or reversed by consuming an entire diet based on whole plant foods – which by the way is the only diet proven to REVERSE heart disease.

Make it a goal to  increase those fruits and veggies!  (Especially now that we know how to store them).

Blessings to you and yours ~

If you’re like me, you might have a file folder (or computer file) labeled “Recipes To Try“.  Well I went into the folder this week and decided to make three recipes from Chuck at the “Brand New Vegan” website.  Here’s how they turned out: 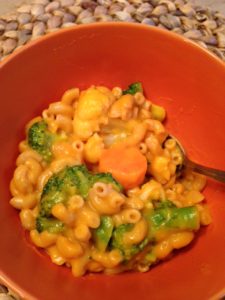 The ‘cheese’ sauce for this recipe is really good.  The base of the sauce is potatoes and carrots, and as Chuck points out in the recipe, it’s creamy, cheesy and decadent.  I agree!  The recipe calls for a bag of frozen veggies to be stirred in at the end of the pasta boiling time, but instead I bought a bag of carrot/broccoli/cauliflower steamers, microwaved them, and stirred them in after the pasta was drained.  The nice thing is that you can add it whatever veggies you want!  Also, I did not have brown mustard on hand, but used Dijon and it worked fine.  NOTE:  The cheesy sauce recipe does make more than you’ll need, so you can either make additional pasta, or save the extra sauce for potatoes, nachos, or wherever you like to eat cheese sauce! 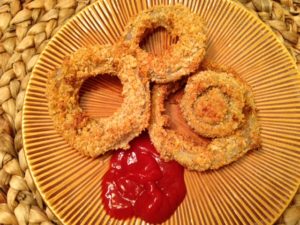 I’ve been craving some really good onion rings, so when I saw this recipe in the “To Try” file, I quickly pulled it out and decided today’s the day.  I followed the recipe pretty much to the tee (except that I forgot to cover the onions while they were soaking in the fridge for an hour).  I’m not sure if that mattered, I’ll find out next time I make them.  In any case, these turned out really well, and yes they are crispy! 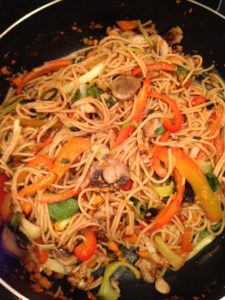 I typically haven’t chosen Lo Mein dishes in the past when we ordered Chinese….but this recipe looked like an interesting comfort food and I had almost everything on hand.  One item I had to purchase was “chili garlic sauce”, and I’m not sure if I used too much, but it proved to be a bit too spicy for my delicate palate.  I can tolerate a little heat, but this one made me break into a sweat; again, perhaps I added too much.   I was also expecting a sweeter tasting sauce, but I’m not sure why since I’ve never ordered Lo Mein!  The recipe calls for only 1 tsp. of brown sugar, which should have been a clue.  Anyway, I added a little “sweet chili sauce” to my own plate which made mine a bit sweeter (but still very spicy for me).  This is a great recipe, I just need to tweak the sauce by cutting back on the chili garlic sauce.  My advice is to start with just a little and add as you go. 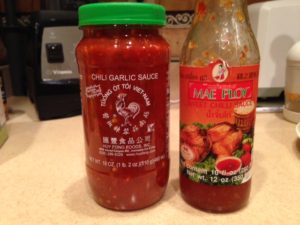 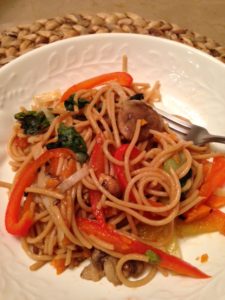 Lastly, I found both the Chili Garlic Sauce and the Sweet Chili Sauce in the Asian section at my local Walmart.

Have you tried any new whole-food, plant-based, oil-free recipes lately that you feel are “keepers”?  If so, we’d love to hear about it!

OUR NEXT POTLUCK:  If you live in the area of Wilmington, IL, we’re hosting our next “World’s Healthiest Potluck” on Friday May 12, 2017.  More details can be found here.   (Seating is limited.  RSVP’s are requested, and the deadline to reserve a spot is Sunday May 7).

Dear friend, I pray that you may enjoy good health and that all may go well with you, even as your soul is getting along well.  (3 John 1:2) 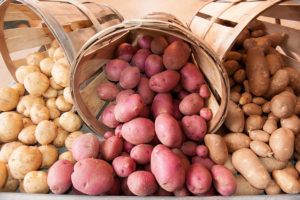 While purchasing my groceries at the check-out line recently, the cashier made the two following comments:

His comment about potatoes led me to shed some light on the poor little potato, often blamed for everything from being a dreaded, fattening carb to having too high of a glycemic index.

Both potatoes and sweet potatoes are nutritious and delicious tubers which can be made into awesome main entrees or side dishes.  And both fit into a healthy diet no matter if your goal is weight loss, health improvement, or both.   And yes, potatoes are SAFE for diabetics; in fact, a whole-food, plant-based diet including starches is able to REVERSE Type 2 Diabetes in a short amount of time.

It’s a common misconception that starchy foods such as potatoes are fattening…… people often believe that the sugars in starches are readily converted to fat, which is then stored in our bellies, hips and butts.  But while it’s true that complex carbs break down into simple sugars, these sugars are absorbed into the blood stream and transported to trillions of cells throughout the body for energy.

Some reasons why potatoes aren’t fattening (from Dr. McDougall’s newsletter):

1)  Don’t Be Dense.  Potatoes are at the bottom of the list of calorie dense foods, at one calorie per gram.  By comparison, sugar, cheese, and beef are about 4 calories per gram and vegetable oils are 9 calories per gram.

3)     Carbohydrate Satisfies the Hunger Drive.  Potatoes are at the top of the carbohydrate list with about 90% of the calories from appetite-satisfying carbohydrates.  (On the other hand, beef, fish, chicken, butter, and olive oil are a few examples of commonly consumed foods with no carbohydrates).

Of course, all bets are off if you top your potatoes with butter, margarine, sour cream, oil, cheese, bacon bits or other added fats.  It’s those high-fat toppings which contribute to the increase in heart disease, diabetes, arthritis, dementia and other chronic disease – not the potato itself!  Fortunately, there are many healthy toppings you can choose, such as salsa, soups, chilies, dressings, low-fat guacamole, or this delicious Golden Gravy.

There are hundreds of healthy potato recipes out there……here are just a few of our favorites:

Bottom Line:  Potatoes are a nutritious, satisfying comfort food which contain vitamins, minerals, fiber, anti-oxidants and phytochemicals (with no cholesterol or fat) – and we can enjoy them freely when they are prepared correctly without the added junk.

I recently had the opportunity to accompany my hubby to Ponce, Puerto Rico, for one of his annual job assignments.  The trip consisted of a 7-day stay…….his work schedule covered three days, and we arrived a few days early in order to explore and enjoy the area.

Sticking to a whole-food, plant-based, no-added-oil diet can be tricky on the road, and we were concerned about being subjected to 7 days of “iffy” restaurant food.   So we decided to purchase a cooler on wheels  – which could be checked in as luggage – and bring as much healthy fare as we could.   Because there was a Walmart and another large grocery store in the area, the plan was to prepare healthy entrees for the cooler, and ‘supplement’ them with items from the store.

Everything was packed in plastic containers (no glass, of course), and other essentials such as ice packs, paper plates and bowls,  plastic silverware, a sharp knife, baggies, a dish wand filled with soap, and a dish towel were also included.  We tightly packed any empty cooler space with towels to prevent the containers from being jostled around.  The weight limit for a checked item is 50 lbs, and the cooler weighed in around 38 lbs.

Here are the PROS and CONS we learned from this maiden voyage of traveling with a cooler full of food:

We’re looking forward to next year’s visit to this beautiful island – with our cooler in tow! 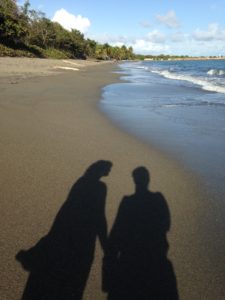